The “Albergo Etico” project was born in 2006 thanks to an happy intuition of friends who developed their activities in different sectors, professionals of the restaurant and tourism system of Asti and of the world of architecture, with the following support of journalists, commercial directors and banking companies, willing to make their contribution to improve the society in which they live. 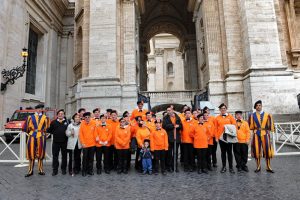 Starting from the observation of the society attending restaurants and without direct experience with people with disabilities, are experimented interventions of attendance to work aimed at skills enhancing for disadvantaged individuals in favor of overall social growth. The computing term ‘Download’ is intended to describe the action of synthesis and simplification of the professional experience towards the person with cognitive, sensory and physical deficits, as in an imaginary data download between operating systems.

Driven by a specific goal, namely make possible for a boy with Down syndrome to conclude, with an internship, his training path at the school of tourism on the Asti’s hills, the chef Antonio De Benedetto, a former student of the Institute, welcomes Niccolò with enthusiasm in his restaurant. A few weeks of work were planned, today we can safely say that it was an internship with dubious results, perhaps without too many expectations. The environment surrounding Niccolò had a disruptive effect. Today that boy is the symbol of the Tacabanda restaurant, of a movement, of a process that is transforming the city of Asti and beyond. He has a regular permanent employment contract and acts as a tutor to the other boys. 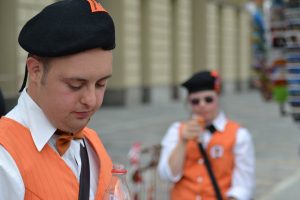 Niccolò’s internship lasts a few months, first in a restaurant and then in a hotel in Valtellina. The Asti Tourist Operators Consortium immediately believed in the project and two years later the boys increased, as well as the link with the hotel training center. The partnership leads to participation, as catering and hospitality operators, at the International Book Fair and the Salone del Gusto in Turin, at the Salone of Little Publishing and at the Monferrato Exprience in Rome; not only that, the boys open the marathons of Turin, Reggio Emilia and Treviso thanks to the collaboration that continues to this day with the “Ambassadors of sport of Asti”.

Due to the contamination in progress the work group grows : in addition to Egidio, who has always assisted his brother Antonio in the restaurant, other professionals in the sector, agri-food companies, bars, ice cream parlors, butchers, pizzerias, restaurants, spas and hotels that embrace the philosophy of the project helping to generate diversified training areas come over. The network generated over time is not limited to providing training opportunities but also welcoming children for short periods.

The model of training and accompaniment to autonomy that we adopt is the result of a participatory process between professionals, children receiving the training and their families: the process of experimenting with educational practices and the constant observation of children has ensured that they are recipients of a model that they shared in its genesis and which contribute to continually develop with their precious contribution, generating a mutual enjoyment of the method by all the people who participate in it for various reasons. The orientation of the project’s action is also the result of theoretical insights: in particular, the writings of Dr. Maria Montessori have constituted a constant reference indicating the direction towards which to strive.

The Association intends to develop an experimental, active and dynamic path, aimed at fully enhancing the potential of people, creating the conditions for them to find their personal motivations to embark on a path of personal growth.

The fortunate coincidence that allowed people with such different personal and cultural experiences to share an experience of developing ways in which to face the problems linked to “diversity” with a total openness to new issues, has generated the environment where each individual brings his own experience as an element of discussion and experimentation, free from any academicism and far from protocols and customs, with the spirit of those who carry out a research starting from scratch ready to verify all hypotheses, sharing the ability to “imagine and dream” that you can aspire to improve yourself and others, thanks also to the positive and stimulating spirit that the children have been able to instill and teach us all.

Any cookies that may not be particularly necessary for the website to function and is used specifically to collect user personal data via analytics, ads, other embedded contents are termed as non-necessary cookies. It is mandatory to procure user consent prior to running these cookies on your website.